This workshop targets female* and trans* artists, scientists, hackers and those curious in art and/or tech, interested in learning and sharing what they know about technology by demythifying and demystifying the so-called “black box”. By means of a fearless environment we invite participants to open electronic devices, break them apart, recycle components, play around with circuit-bending, questioning functionality, or simply hang out for a little chat and a cup of tea. Additionally, the workshop aims to be a meeting point for all female* and trans* hackers and/or artists interested in networking regardless of their background, experience, and level of knowledge. Mz* Baltazar’s is interested in getting to know and listen to its peers, connecting and bringing together female* and trans* people who share post-internet, hacktivist, queerfeminist, and DIY/DIT, open source political views.

Hacking is nowadays a common practice and creative strategy employed among post-internet artists. By subverting the system, reverse engineering, hacking creative processes, defending access and openismus, they instrument a bottom-up methodology using deconstruction as a method to “make” art. Acknowledging Vilém Flusser’s (1986) challenge of opening the “black box” they question what is behind commercial apparatuses, defying their potential with the awareness of the impact of technology in the current neo-liberal market. Built upon the belief that art practice can be a critical impetus for social change, hacking practices and methods might be constituted as a potential tool for activating the spectator, emancipating and leading them into the process of questioning consumer capitalism.

Yet, those important tools of critical thought are still not completely accessible to all genders, since in the current time we still face the problem that women* and trans* people are a minority in both the creative and technical design of new technologies. The scenario is particular worrying in the context of hackerspaces, makerspaces, media art festivals, media art exhibitions and media art university degrees. This problem stems from the fact that electronic and programming are very often connoted as white normative male tools, and likewise the way technology is introduced to women and trans* people in their social and creative environment.

As an alternative, several initiatives such as Mz* Baltazar’s Lab based in Vienna, aim to contribute for merging the gender gap of female* and trans* people in the art, scientific and technology realm/ market by offering them tech/ art workshops, exhibition space and a supportive active community in a discrimination and sexual harassment free environment. By creating a space that fosters creativity, activism and provocative thinking MzB aims to empower women* and trans* people and support them in the development of their projects. Conscious that the intertwining of diversified knowledge and experience is primary for a community-building process, MzB invites women* and trans* people from different mindsets and backgrounds to share and collaborate without restrictions. Penetrating the black box is an invitation for those that are interested in intersecting their view points with other politics of perception contributing for a critical thought towards the necessity of demythifying and demystifying the ‘black box’. 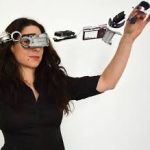 Her artist practice pursues new ways of interaction and sensorial engagement with the public in the interdisciplinary field of art and technology.

She Graduated in Visual Arts from the ESAD (Superior School of Art and Desing, Caldas da Rainha) Portugal, in 2004, and in 2011 presented her masters thesis in the Production and Creation in Technological Art Master program, at the Lusófona University, Lisbon, Portugal, with the title Inside out: Myself as Diana - Audiovisual participatory Installation. Female representation and its relation between public and private. She's a Ph.D. in art with the thesis Underneath the skin another skin: Body, screen and interface for an interactive haptic visuality presented at the University of Évora, Portugal, in 2016 with summa cum laude distinction. She was a fellow researcher from National Science Technology Foundation of Portugal (2011-2015). From 2006 to 2012, she was lecturing Photography, Video and Digital Arts at the Polytechnic Institute of Beja, Portugal. Currently she lectures at the Universität für Angewandte Kunst in Vienna and at the Kunstuniversität Linz, Austria.

Date:
4. June 2016
Time:
14:00–17:00
Door policy:
FLIT only
Registration:
Please Register at patriciajoaoreis@gmail.com
Requirements:
if you want/ have bring the old broken toaster or radio that has been hanging around at your place/ work since forever. Other electronic materials that might be a potential hacking device!
Cost:
Free
Event Tags:
art, DIY, DIY/DIT, feminism, hacking, making, queer, “do it together”